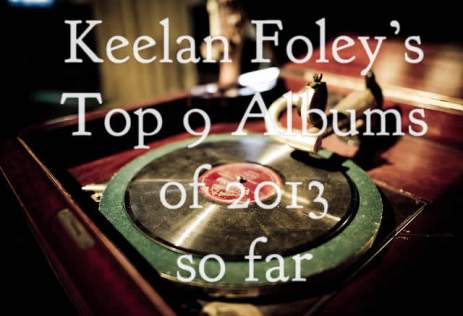 It’s that time of year again. Secret parliamentary meetings are being held in airtight underground bunkers, MENSA have called in their big guns and music bloggers everywhere are racking their brains as the world comes together to declare, in it’s own opinion, the top music albums of 2013…so far. And I myself cannot help but be swept along by the sea of intrigue and enthusiasm and have, against my better judgment, compiled my own top musical list. Ah but before you gather round to label me as a conformist and perpetual sellout I have made one significant change. Rather that a typical  ‘Top 10’ I have drafted my own ‘Top 9 Albums of 2013 so far’ . Why 9 I hear you ask? Well, this is either my minute effort at individuality or most likely because I have only come across 9 noteworthy albums in the first half of the year.

Well of course I have listened to more than the below listed 9 albums and I am sure a lot of you will notice some glaringly obvious omissions. But the real reason for my inability to populate a top 20, of 25 even is due to a number of factors. The most prevalent one stems from my musical tastes as the majority of my listening hours are dominated by bands from times long ago. The rest of my musical minutes belong to the ever-growing independent submissions to the blog itself. And between the two it can be quite easy to somewhat lose track of current musical releases. But nevertheless, I’ll press on with my Top 9 Albums of 2013…so far.

And the winner is… From the moment I decided to make this list, a.k.a. five minutes ago, I knew that Foals would undisputedly take the number 1 spot. Holy Fire is laden with impressive tracks such as Late Night, Everytime, Milk and Black Spiders and who could forget, one of the most over-played tracks of the year (barring Bastille, who I refused to even mention in this post) My Number.

4. Foxygen – We Are The 21st Century Ambassadors Of Peace And Love

Tracks from all the above mentioned albums can be streamed in this handy Spotify playlist :